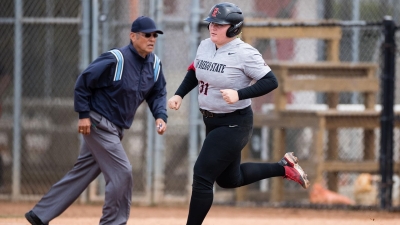 March 6, 2022 (San Diego) -  San Diego State split a pair of games on the final day of the San Diego Classic Sunday afternoon at SDSU Softball Stadium. The Aztecs (13-9) run-ruled Stony Brook 8-0 in six innings in the opener before falling to Boston University 7-2 in the nightcap.

In the opening game, Mac Barbara homered twice, and Maggie Balint and Dee Dee Hernandez combined on a three-hit shutout in an 8-0 victory over the Seawolves (7-3).

Taylor Adams led off the third with her second home run of the year and was 2-for-2 with two runs for San Diego State, which outhit SBU, 11-3.

Espinoza finished with two hits in the game, while Schultz and Jillian Celis each singled, walked and scored a run.

The offense was plenty for the 1-2 punch of Balint (6-3) and Hernandez. Balint started the game and tossed four scoreless innings, allowing three hits, a walk and a hit batter, while striking out six. The right-hander now has 110 strikeouts on the season in 65 innings. Hernandez, meanwhile, pitched two scoreless innings of relief with one strikeout.

The nightcap wasn’t as kind for SDSU as the Terriers (8-10) scored three runs in the top of the first en route to a 7-2 victory.

BU scored its three runs on five hits and a sacrifice fly.

San Diego State got one back in the bottom of the first as Barbara’s fielder’s choice scored Espinoza.

A double by Schulz scored Brocki in the second, but the Aztecs were held scoreless the rest of the game.

Boston Univ. tacked on two more runs in the third on a bases loaded single by Audrey Sellers.

The Terriers also had a sac fly in the fifth and an RBI single by Emily Gant in the seventh to finish up their scoring.

Hernandez took the loss after allowing five runs (three earned) on seven hits and a walk over three innings. The left-hander struck out one and is now 2-3 on the season. Dani Martinez yielded two runs on four hits over the final four innings of the game.

With two home runs against Stony Brook, DP/C Mac Barbara became the second Aztec this season with multi-homers in a game (also C/DP Danielle Romanello against Cal Poly on Feb. 13).

DP/P Mac Barbara hit her ninth and 10th home runs in the opener against Stony Brook to become the fastest player in school history to reach 10 home runs in a season (21st game), eclipsing Patrice Jackson, who homered for the 10th time during the 2014 season in her 23rd game.

SDSU plays at USD for the Torero Classic next weekend with games against Weber State on Thursday (3 p.m.) and Friday (noon), CSUN at 2 p.m. on Saturday and at San Diego at 12:30 p.m. on Sunday.