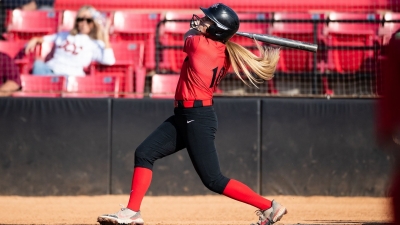 February 25, 2022 (Cathedral City, Calif.) - The San Diego State softball team run-ruled UC Davis 9-1 in six innings to salvage a Thursday night split on the first day of the Mary Nutter Collegiate at Big League Dreams in the Palm Springs area. The Aztecs, who lost to Cal State Fullerton 7-3 in the opener, are now 10-3 on the season.

In the nightcap, SDSU recorded a season-high 12 hits and rode the arm of freshman Dee Dee Hernandez to a 9-1 win over the Aggies (5-4). Facing UCD’s ace Kenedi Brown, who came into the game with a 3-1 record and 1.00 ERA, San Diego State scored four runs in the bottom of the second, one in the fourth, and two each in the fifth and sixth to pick up the mercy-rule victory.

Danielle Romanello got things going for the Aztecs with a leadoff home run in the second. AJ Murphy later scored on a throwing error by UCD shortstop Libbie McMahan before a two-out triple by Jillian Celis plated Makena Brocki and Macey Keester.

Nicole Siess scored on a wild pitch in the fourth to five SDSU a 5-0 lead.

In the fifth, Murphy knocked in Alexa Schultz with a single through the left side and Audrey Kull later scored on a passed ball.

UC Davis finally got on the scoreboard with two outs in the top of the sixth inning when a Leah Polson single scored Sommer Kisling.

San Diego State, however, completed the run-rule victory in the bottom of the sixth. Celis hit a one-out double and later scored on a single by Mac Barbara. Romanello followed with a double to right-center field to plate Barbara and end the game.

Celis had three hits, two RBIs and a run, and was just a home run short of the cycle, to lead the Aztecs. Romanello (HR, 2B, 2 RBI, R), Murphy (RBI, R) and Keester (R, SB) each added two hits apiece for SDSU, which outhit the Aggies, 12-4. Barbara and Schultz also each recorded a hit and a walk.

The offense was plenty for Hernandez (2-0). The left-hander was perfect until a two-out single by McMahan in the fifth after Grace Kilday had reached on a throwing error. She struck out Ale Mota to get out of the jam. Hernandez struck out four over five innings with just one hit allowed.

Dani Martinez came in for the sixth and allowed one run on three hits, while striking out one.

CSF, which beat Arizona, 1-0, in its first game of the day, got on the scoreboard in the top of the third inning on a two-run home run by Hannah Becerra.

SDSU cut into the lead in the bottom of the third when Jessica Cordola’s pinch-hit single scored Celis.

Cal State Fullerton responded with the aforementioned five-run fifth, scoring all five runs with two outs. The Titans had an RBI single by Megan Delgadillo, a pinch-hit, two-run double by Daisy Munoz and a two-run single by Jessi Alcala.

San Diego State made a late charge in the seventh with two outs when Schultz singled and Barbara followed with her fifth home run of the season. CSF relief pitcher Alexia Silvas, however, got Bella Espinoza to fly out to left field to end the game.

Celis and Murphy had two hits apiece to pace San Diego State, which had seven players record at least one hit. Barbara also hit the two-run homer and walked twice, while Shultz singled, walked and scored a run.

Maggie Balint took the loss after allowing four runs on five hits over 4 2/3 innings, while striking out 10. It was Balint’s (4-2) fifth double-digit strikeout game of the season in six appearances (the other game was eight strikeouts in four innings). Allie Light relieved Balint in the fifth and gave up three runs on five hits and two walks over 1 1/3 innings, while striking out one. Martinez came in for the seventh and struck out one in a perfect inning of relief against her former team.

SS/2B Jillian Celis tripled in each game and already has four in 13 games this year. The four triples are tied for the fifth most in Aztec single-season history (the school record is six set by Kayla Jordan in 2013).

Thirteen games into the season, SDSU already has more run-rule victories (4) than it had in all of 2021 (3).

SDSU continues its play in the Mary Nutter Collegiate Classic with games against No. 18/15 Northwestern (3 p.m. PT) and No. 5/5 Washington (6 p.m. PT) on Friday.