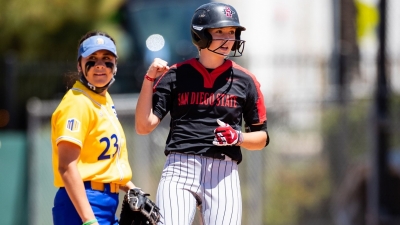 February 11, 2022 (San Diego) - San Diego State split a pair of games against 2021 NCAA tournament teams at the San Diego State Season Kickoff Friday night at SDSU Softball Stadium. The Aztecs (2-1) opened with a 9-1 victory over UIC in five innings before being edged by Stanford 1-0 in the nightcap.

In the opener, SDSU banged out 13 hits, scoring in all five innings in the 9-1, run-rule victory. Playing as the visitors, San Diego State scored two runs in the top of the first inning, once in the second, and then two each in the third, fourth and fifth innings, respectively.

Taylor Adams led the way with three hits, falling a home run short of the cycle. She singled in the first, doubled in the third and hit a two-run triple in the fourth. This came a day after she homered in a 3-1 win over Middle Tennessee in Thursday’s opener. Adams also scored a run and stole a base.

The offense was plenty for the 1-2 punch of pitching newcomers Dee Dee Hernandez and Dani Martinez. A freshman making her first career start, Hernandez allowed one run on four hits over three innings, while striking out two for her first collegiate victory. Martinez, meanwhile, who spent the last three seasons at Cal State Fullerton, tossed perfect two innings of relief with two strikeouts.

The nightcap featured a pitchers’ duel between Aztec Maggie Balint and Cardinal Alana Vawter. The two combined for 19 strikeouts and just one walk, while allowing 10 hits (all singles).

Balint (1-1) was the tough luck loser for SDSU, allowing one run on four hits and a walk over seven innings. She struck out 11 and now has 24 strikeouts through her first two games (13 innings).

The lone run of the game came in the top of the third inning with two outs and Sydney Steele on first base. Steele advanced to second on a wild pitch and scored when Sydnee Huff dug out an infield single to Celis at shortstop. Steele rounded third and headed for home while the bang-bang play was going on at first and slid into home for the only run of the game.

Espinoza and Perez had two hits apiece to pace the Aztecs, who outhit the Cardinal, 6-4.

In the opener, SDSU won its 47th consecutive game when scoring at least nine runs.

Through three games, San Diego State’s pitching staff has combined for a 1.11 ERA in 19 innings, limiting the opposition to a .179 average.

RHP Maggie Balint already has two double-digit strikeout games in two appearances in 2022 after entering the season with two in her first 53 appearances with the Aztecs.

SDSU continues its play in the San Diego State Season Kickoff with a single game against UIC at 7 p.m. PT Saturday.

Vawter and Kaneshiro; Balint and Romanello

Other Games at the San Diego State Season Kickoff on Friday