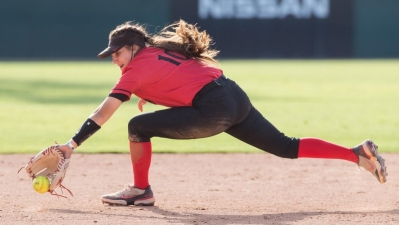 SDSU edges Bulldogs 2-1 in opener before falling 10-0 in the nightcap
Source:  goaztecs.com
Photo courtesy goaztecs.com
May 14, 2021 (San Diego) - an Diego State split a doubleheader with the Mountain West champion Fresno State Friday afternoon at SDSU Softball Stadium. The Aztecs (28-15, 13-10 MW) edged the Bulldogs (35-10, 19-4 MW) 2-1 in the opener before falling 10-0 in five innings in the nightcap.

The opener featured a pitchers’ duel between all-MW first-teamer Maggie Balint from SDSU and the MW Pitcher of the Year Hailey Dolcini from FS. The game had only five combined hits, including three by Fresno State and two by San Diego State.

The Bulldogs scored their run in the top of the second inning when Miranda Rohleder was hit by a pitch with the bases loaded, which scored pinch runner Aaliyah Cuevas. Balint (17-7) got out of the jam by getting the MW Player of the Year Keahilele Mattson to pop up to Aztec shortstop Jillian Celis.

SDSU answered in the bottom of the fifth as Nicole Siess reached on a nine-pitch walk. Shelby Thompson tried to move Siess up a base on a sacrifice bunt but FS third baseman Schuylar Broussard stumbled and threw the ball well over the head of first baseman Vanessa Hernandez. The speedy Siess raced all the way home, while Thompson moved to third on the play. Celis then followed with a sacrifice fly to left field to put San Diego State on top, 2-1.

The two runs were all Balint would need. The right-hander allowed one run on three hits, a walk and two hit batters over seven innings, while striking out four. Balint finished her day retiring the final 16 batters she faced.

Jeweliana Perez and Sara Lillie each had the Aztecs’ hits, while Siess and Danielle Romanello drew two walks apiece.

The Bulldogs scored five runs in the second, thanks to a pair of home runs, two in the fourth and three in the fifth to secure the run-rule victory. FS recorded 11 hits for the game and was also just as dangerous on the basepaths with five stolen bases.

Jillian Celis recorded her 13th double of the year in the second game. The 13 doubles are tied with four others for the 10th most in Aztec single-season history.

San Diego State looks to take the rubber game of the series at noon PT Saturday.