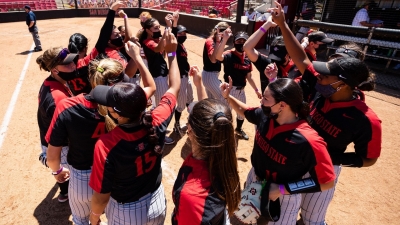 May 8, 2021 (Fort Collins, Colo.) - The San Diego State softball team swept a doubleheader over Colorado State Saturday afternoon at Ram Field. With the two victories (7-4 and 5-2), the Aztecs (27-13, 12-8 MW) have won five straight series, six consecutive games and 13 of their last 15 games overall.

In the opener, SDSU homered twice and banged out 10 hits in a 7-4 triumph.

San Diego State got things going in the top of the second inning when Sara Lillie hit a three-run home run over the right-field fence. Danielle Romanello had led off the inning with a double down the right-field line and Taylor Adams later was hit by a pitch before Lillie cleared the bases for the third time this season.

The Aztecs added to their lead in the fourth as Shelby Thompson singled up the middle to score Nicole Siess, who had got into scoring position on a two-out error.

CSU responded in the fifth, scoring three runs on three consecutive hits with no outs.

SDSU answered in the sixth when Lillie led off with a single and scored on a triple by Siess. After Colorado State replaced Julia Cabral in the circle with Danielle Serna, Thompson took a 2-2 pitch well over the left-center field fence to make it a 7-3 game. It was her ninth homer of the year.

A leadoff homer by Tara Shadowen in the bottom of the sixth closed the game to 7-4, but the Rams were unable to get a run across the plate in the seventh.

Maggie Balint picked up the win after allowing four runs on seven hits and a walk over the complete game victory, striking out one. The right-hander improved to 16-6 on the season.

In the nightcap, SDSU rode the arm of Marissa Moreno and used some timely hitting in a 5-2 win.

San Diego State scored in the top of the first inning as Jillian Celis hit a one-out double and later scored on a double down the left-field line by Sadie Langlet.

After each team failed to get a run across the plate in the second, third and fourth innings, respectively, despite plenty of chances, the Aztecs came through with three runs in the fifth, all with two outs. Adams first reached on a fielding error by third baseman Corina Gamboa, then moved to third on a double by Lillie. Jessica Cordola, who had a walk-off, pinch-hit single in a 1-0 SDSU win over New Mexico last Sunday in her last plate appearance, came up big again with a pinch-hit single to right field on a 2-2 pitch to knock in both runners. Siess replaced Cordola at second base after Cordola moved up a base on another Colorado State error and Thompson followed with a bloop single to left-center field to make it a 4-0 San Diego State advantage.

The Aztecs tacked on a run in the seventh when Siess scored on a throwing error with Celis at the plate.

It appeared Moreno (6-4) was going to pick up her second save of the season when she followed a Maya Matusbara leadoff single with a flyout and popout. Corina Gamboa, however, lifted the first pitch she saw just over the left-field fence for the Rams’ first runs of the game. Moreno yielded a four-pitch walk to Danielle Serna but got Hailey Smith to pop up to Romanello behind the plate to secure the SDSU sweep.

Moreno allowed two runs on four hits and six walks, while striking out five. Moreno had three 1-2-3 innings but got out of bases loaded jams in the second, third and fifth, respectively. The biggest threat came in the fifth when Shadowen drew a one-out walk and Haley Donaldson reached on a fielder’s choice. Gamboa followed with a walk to load the bases for the third time against Moreno, but the right-hander got both Serna and Smith to line out to Celis at shortstop to keep the game scoreless at the time. Altogether, CSU was 2-for-15 (.133) with runners on base against Moreno and 0-for-4 (.000) with runners in scoring position.

The Aztecs left 13 on base, while the Rams stranded 10 in the game.

The Aztecs swept a doubleheader at CSU for the first time since 2013. It is just the fourth time SDSU has accomplished the feat in the Mountain West era (also 2000, 2002 and 2006).