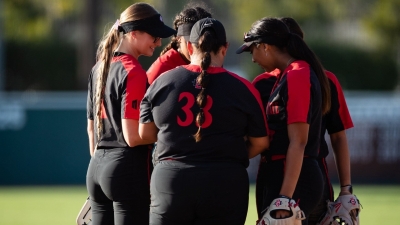 February 19, 2022 (San Diego) - San Diego State picked up a pair of victories over Army West Point and Southern Utah on the third day of the 31st annual Campbell/Cartier Classic Saturday night at SDSU Softball Stadium. The Aztecs (8-2) first knocked off the Black Knights (1-3) 7-3 before one-hitting the Thunderbirds (0-9) in an 11-0, five-inning victory in the nightcap.

In the opener, SDSU quickly jumped out to a 6-0 lead after three innings and coasted to a 7-3 win over AWP.

Jessica Cordola got things going for San Diego State when she hit a three-run homer on the first pitch she saw in the top of the first inning.

In the second, Alexa Schultz scored on an infield single by Nicole Siess to make it 4-0 Aztecs.

Back-to-back singles in the third by Schultz and Danielle Romanello plated Bella Espinoza and Schultz, respectively, to put SDSU up by six runs.

Army West Point halved the lead in the bottom of the fourth, however, on a three-run home run by Madi Gilmore.

San Diego State completed the scoring in the sixth as Jillian Celis singled, stole second and scored on a single by Taylor Adams.

Barbara (walk), Celis (walk) and Schultz (hit by pitch) each reached base three times with two hits apiece for the Aztecs, who outhit Army West Point, 11-4.

Maggie Balint picked up the win after allowing three runs on four hits and a walk over four innings, while striking out eight of the 17 batters she faced. The right-hander is now 3-1 on the season. Dee Dee Hernandez tossed a perfect three innings of relief with three strikeouts to record her second save of the season.

In the nightcap, SDSU used 11 hits and a combined one-hit shutout by Dani Martinez and Allie Light in a 11-0, run-rule win over SUU in five innings.

The 1-2 punch of Martinez (2-1) and Light had a perfect game going through 4 2/3 innings until Makall Whitten’s two-out double gave Southern Utah its first baserunner. Light struck out Amyah Boostedt looking to end the game.

Martinez pitched a perfect three innings with four strikeouts, before giving way to Light. Light gave up the lone double, while striking out three over the final two frames. San Diego State was looking for its first perfect game since 2007.

The Aztecs scored all 11 runs over two innings, plating five in the bottom of the second and six in the third.

AJ Murphy doubled in Espinoza with her first career hit before scoring on an Elianna Reyes infield single. Barbara later hit a three-run home run to finish off SDSU’s scoring in the second. It was her fourth home run of the season in just 10 games.

In the third, Celis tripled down the first-base line to plate Murphy and Reyes, and scored on a single by Macey Keester. Keester later scored on a Schultz single before a Makena Brocki double knocked in Adams and Schultz for the final runs of the game.

Barbara and Reyes each had two hits to pace San Diego State, while Adams walked in all three plate appearances.

The Aztecs recorded their 32nd one-hitter since at least the 2000 season and first since Hannah Johnson one-hit St. John’s on Feb. 29, 2020.

After recording just five hits to start the week on Wednesday (two hits in 3-1 win over San Diego) and Thursday (three hits in 6-4 loss to CSUN), SDSU has combined for 31 over its last three games.

SDSU wraps up its play in the 31st annual Campbell/Cartier Classic with a game against California Baptist at 12:30 p.m. Sunday.