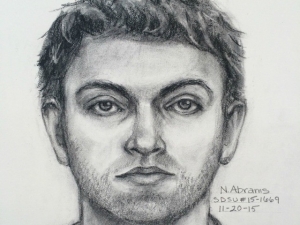 November 23, 2015 (San Diego) – In response to an assault on a Muslim woman at San Diego State University last week,, the Muslim Student Association  announced a rally against Islamaphobia at Hepner Hall held earlier at 12:30 p.m. today.

On Thursday, a man ripped a head scarf off a young woman walking on campus and pushed her, using racial slurs.  The student was not injured, however the assault is being investigated as a hate crime.

Campus police describe the suspect as a white man in his 20s,  thin with black hair and green or hazel eyes, about 5 feet 11 inches tall.

The Muslim Student Association called for a zero tolerance policy toward Islamophobic rhetoric and actions campus as well as mandatory training for faculty, staff and students as well as coursework on Islam to eliminate what it calls “systems of oppression” that can lead to scapegoating of Muslim students. The group says it wants to foster a “more inclusive climate by promoting tolerance and acceptance between different cultures and religions."

The Council on American-Islamic Relations in San Diego issued a statement indicating the attack on the Muslim woman at SDSU could be related to a “backlash against the American Muslim community since the recent terror attacks in Paris."

The Islamic State, or ISIS, has claimed credit for the brutal attacks on a theater, stadium, and restaurants in Paris.

"A phobia is a type of anxiety disorder, usually defined as a persistent fear of an object or situation in which the sufferer commits to great lengths in avoiding, typically disproportional to the actual danger posed, often being recognized as irrational." Just what liberals always do, use labeling to set the argument in their favor from the beginning. This comes directly from Alinsky, https://en.wikipedia.org/wiki/Rules_for_Radicals The facts facts are these: https://en.wikipedia.org/wiki/List_of_Islamist_terrorist_attacks SDSU is controlled by radical Reconquista elements. They know Alinsky very well as they have been using his rules for their own agenda for years. They also know that Muslims in America vote predominately Democratic. Ergo, they are attempting to use the "-phobia" moniker to get admission for as many Muslims as possible...to further their political agenda. The only problem is, they are backing an ideology that uses terror as a matter of course....and no one is buying it this time. Rally away.....

no such thing as islamophobia, homophobia or other left wing language bastardizations.

cair is a terrorist support group and should be banned , as far as mandatory training in mohammedan things .. I will not type bad language but it includes and f and yourself