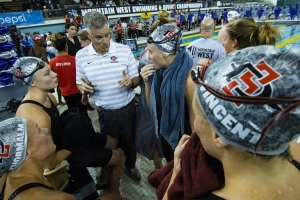 Aztecs kick off season vs. UCLA and USD Sept. 13

August 28, 2019 (San Diego) - Head coach Mike Shrader of San Diego State swimming and diving team has released the team's 2019-20 schedule. The Aztecs kick off the season on Sept. 13 when they take on San Diego and UCLA for a pentathlon meet at the University of San Diego.

SDSU's early-season schedule features a lengthy road trip to the Pacific Northwest and Alaska. The Aztecs will compete in double-dual meet against Washington State and Nevada on Sept. 27 at WSU and then head to Idaho on Sept. 28.  SDSU will then head straight to Alaska where they will compete against Alaska Fairbanks on Sept. 29 and 30.

SDSU then returns to California for a dual meet at Pepperdine on Oct. 10.  After traveling to Malibu, the Aztecs will continue their trek north, taking part in the Fresno Invitational on Oct. 11-12.

The Aztecs will have their first home meet October 18 when they host Boise State and Pepperdine for a double dual meet.

After a 13-day break, the Aztecs head to UC Davis where they will face UC San Diego, Pepperdine, Cal State East Bay and Pepperdine Nov. 1 and 2. The Aztecs will then have close to a month to prepare for its biggest test of the fall semester, the Mizzou Invitational in Columbia, Missouri Nov. 20-22.

After Thanksgiving, SDSU returns to the Aquaplex for a double-dual meet against Vanderbilt and Seattle.

The Aztecs will kick of 2020 with a home pentathlon meet against Air Force, San Diego, San Jose State and Incarnate Word January 3.

Next up will be another double dual meet where they square off against Fresno State and Cal Poly Jan. 11 in San Luis Obispo, Calif.

SDSU battles San Diego for the second time during the 2019-20 campaign on Jan. 24 at the Aquaplex.
The 2019-20 Mountain West Championships will once again take place in Minneapolis, Minn. running Feb. 19-22.

SDSU's divers will look to qualify for the national meet at the Zone E Diving Championships in Flagstaff, Ariz. on March 9-11. The NCAA Championships will take place in Athens, Georgia from March 18-21.