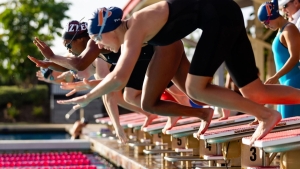 Aztecs are now 5-0 in dual meets

October 10, 2019 (Malibu) - The Aztec swim and dive team beat Pepperdine 66-60 in a dual meet at the Raleigh Runnels Memorial Pool Thursday morning. SDSU had the best time in five of the six swimming events and swept the one-meter diving competition. The Aztecs improved to 5-0 in dual meets on the year.

The Aztecs posted the top six scores in their first diving competition and were led by Delaney Gallagher’s 291.60 points. She was followed by Marie Yacopino (268.70) and Ximenia Lechuga Gonzalez (260.30).

SDSU had the fastest time in both relays. They opened the swimming portion of the meet with the team of Elli Ferrin, Morganne McKennan, Klara Thormalm and Sammy Geyer finishing in 1:46.82 in the 200-yard medley relay. The Aztecs closed the meet with a time of 1:38.74 in the 200-yard freestyle relay. That squad consisted of Peyton Wilson, Evonne Stehr, Sammy Geyer and Lizzie Menzmer.

Klara Thormalm had the top time in the 50-yard backstroke, hitting the wall in 26.78.

SDSU had the top two times in the 50-yard breaststroke with Sammy Geyer hitting the wall in 30.13 and was followed by Elli Ferrin’s 30.93.

Alma Thormalm and Lizzie Menzmer recorded the two fastest time in the 50-yard freestyle. Thormalm finished in 24.15 and Menzmer in 24.67.

The lone event where Pepperdine had the fastest time was the 50-yard butterfly. Lizzie Menzmer (26.94) finished second and Mia Ryan (27.18) took third in that event.