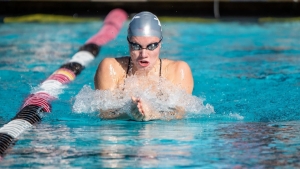 The Aztecs welcomed the University of San Diego Toreros, Air Force Falcons, Incarnate Word Cardinals and the San Jose State Spartans for morning pentathlon action. The teams competed in multiple heats of the 100 freestyle, breaststroke, butterfly, backstroke and individual medley. Two swimmers from each program swam in each heat of the event, allowing for the full rosters of all four teams to compete and earn marks throughout the pentathlon.

Senior Klara Thormalm registered the top combined time throughout all five events with a mark of 4:50.73. Junior Alma Thormalm earned the next best combined effort, recording an overall time of 4:59.26. Sophomore Kristina Murphy earned the third-best overall mark at 4:59.90 across all five events.

Klara Thormalm paced the freestyle efforts, recording the fastest time in all 12 heats with a mark of 51.67. Just behind her was her sister Alma Thormalm, touching the wall in 52.25. Seven of the ten fastest times swam in Friday’s freestyle efforts were by Aztec swimmers, including the third-fastest mark from sophomore Mia Ryan and the tied-for-fifth best time from senior McKenna Meyer.

Unsurprisingly, Aztec senior and school record holder in the 100 butterfly Courtney Vincent led all swimmers in her specialty, touching the wall in 56.52. Six other SDSU swimmers earned top-10 finishes, with Klara Thormalm registering the third-best time of 58.32, Ryan finishing with the fourth-fastest mark with a time of 58.33, and freshman Riley Tapley rounding out the top five swims with an effort of 59.07.

Klara Thormalm continued her stellar day with the second-fastest mark in the 100 backstroke, finishing her effort in 58.08. Her mark was just .02 seconds behind Air Force’s school-record holder in the event, junior Kylie Stronko. Tapley earned the third-best time touching the wall just .01 seconds later, while Alma Thormalm recorded the fifth-fastest mark with a time of 58.65.

The 100 breaststroke was once again led by Klara Thormalm, earning the top time seen in the pool with a mark of 1:03.91. Murphy finished just behind her, touching the wall at 1:05.01, while junior Larisa Tam recorded the third-fastest mark with a time of 1:05.76.

The Scarlet and Black closed out the day with the top five times in the 100 individual medley, led by Klara Thormalm once again, finishing her medley in 58.75. Murphy touched the wall with a mark of 59.45 for the second-best time and Alma Thormalm rounded out the top-three times recording a time of 59.52.