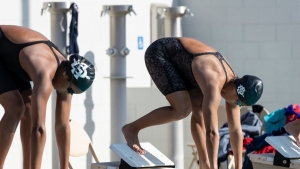 December 5, 2020 (Fresno) - The San Diego State swimming and diving team had a successful start to their 2020-21 season, competing at and winning the Fresno State Invitational in Fresno, Calif. Dec 4-5.

SDSU opened competition Friday sweeping all four of the events in the first session. The Aztecs started with a dominant performance in the 200-medley relay, as the quartet of juniors Sammy Geyer and Lizzie Menzmer and seniors Elli Ferrin and Klara Thormalm topped the field of competition by four seconds, touching the wall at 1:41.46.

Sophomore Paige Mitchell continued the session with a strong 500 freestyle swim, earning a career-best effort and a first-place finish with a time of 4:50.96. Fellow sophomore Mia Ryan finished right behind her with a mark of 4:59.17.

Kristina Murphy began her junior campaign with the top finish in the 200-individual medley, topping the podium with a 2:04:05 performance. Just .60 seconds behind her was sophomore Riley Tapley and rounding out the top-three finishers was Ferrin with a third-place time of 2:06.21.

Thormalm continued her success in the 50 free, as the reigning Mountain West champion finished first at 22.93. Menzmer secured a third-place swim when she touched the wall less than a second later, finishing with a time of 23.55. Ryan swam a collegiate-best time of 23.61 to finish fourth.

Similar success followed in the second session Friday, as the Aztecs topped the standings in all but one of the six events. The 400-freestyle relay squad of Ryan, Menzmer, Thormalm and sophomore Evonne Stehr finished first with a time of 3:26.16, while the Aztecs “B” squad of Geyer, sophomore Emily Gebhardt and freshman Ashlyn Hemphill and Alex Gershman earned a bonze finish with a time of 3:32.35.

Murphy earned her second win of the day when she finished first in the 400-individual medley with a time of 4:22.38. Tapley lead all swimmers in the 100 fly, touching the wall in 55.43 while Ryan topped the podium in the 200 free with a time of 1:50.53. Thormalm closed out the Aztecs’ top finishes for Friday with a first-place swim in the 100 breast, defeating her opponents with a finish of 1:00.26. The final event of the day was the 100 back, where FSU’s Athena Clayson took the top finish with a time of 54.73, while Tapley finished just .16 seconds behind her for a career-best time of 54.89 and second place.

Saturday kicked off with a SDSU win in the 400-medley relay, as the “A” team of Ferrin, Geyer, Tapley and Ryan touched the wall more than four seconds faster than their opponents and marked a time of 3:45.01. Sophomore Christy Neufeld secured the best Aztecs’ finish in the 1650 free, placing third with a collegiate-best mark of 17:32.12.

On the springboard, 2019-20 Mountain West Diver of the Year Ximena Lechuga Gonzalez led the way for the Aztecs, topping the podium in the 3-meter competition with a score of 281.10 and placing second in the 1-meter performances with a mark of 262.43. Senior Erica Sarver earned the Aztecs’ next-best finish on the 1-meter, finishing fourth overall with a score of 234.60.

The Aztecs take a short four-day break from competition and return home to the Mesa to host the University of San Diego Toreros for a pentathlon meet on Thursday, Dec. 10. Events will begin at 2:30 p.m. Due to the city, county and state protocols, fans will not be able to attend any SDSU swim meets for the foreseeable future.