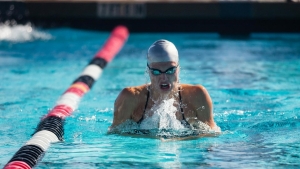 SDSU once again saw program records fall as the 200 medley relay team of senior Alma Thormalm, senior Morganne McKennan, senior Courtney Vincent, and junior Klara Thormalm earned a bronze finish with a time of 1:39.24, the eighth-fastest swim in school history. The Aztecs continued their success into the 800 freestyle relay where the quartet of senior Peyton Wilson, sophomore Mia Ryan, freshman Milena Karpisz and senior Mckenna Meyer brought home a silver-medal finish after swimming to a time of 7:20.73.

In the 400 individual medley, both Meyer and sophomore Kristina Murphy earned spots in the A final with fifth and seventh-place finishes in the preliminary heats, respectively. Meyer swam to a time of 4:19.23 while Murphy touched the wall at 4:20.80. Meyer then cut almost four seconds off her preliminary time, swimming to a time of 4:15.45, to secure fourth place in the final heats, while Murphy followed suit cutting a second off her qualifying time to finish in sixth place overall with a time of 4:19.98.

The Aztecs had one representative in the 200 free finals as freshman Milena Karpisz continued her success from day one finishing sixth in the preliminary heats with a time of 1:49.28. She would go on to also finish sixth in the finals touching the wall in 1:48.32.

The Scarlet and Black shined in the 100 breast as Klara Thormalm, McKennan, and sophomore Sammy Geyer each qualified for the A finals placing first, second, and fourth respectively in the preliminary heats. In the finals, McKennan topped Thormalm with a first-place swim of 59.83 while Thormalm placed third with a time of 1:00.82. Geyer finished in seventh place overall with a time of 1:01.87.

After her record-breaking day Wednesday, Vincent secured a spot in the 100 back B final with a tenth-place finish in the preliminary heats, swimming to a time of 55.32. Freshman Evonne Stehr swam alongside her in the B final after collecting 16th in the qualifying heats with a time of 55.66. In the B final, Vincent cut off almost a second from her preliminary time to place tenth overall, touching the wall in 54.76, while Stehr jumped three spots after slashing .3 seconds off her qualifying swim to place 13th.