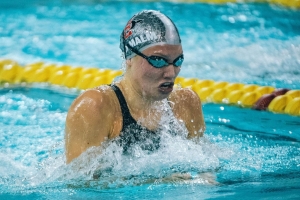 Klara Thormalm set a pool record in the 100-yard breastroke

Klara Thormalm’s record breaking time of 1:01.58 earned SDSU 20 points. Morganne McKennan finished in second in the event with a time of 1:03.90.

Courtney Vincent earned a second-place finish in the 100 butterfly with a time of 55.43.

Elli Ferrin came in third in the 100-yard backstroke, hitting the wall in 55.74.

Ximenia Luchuga Gonzalez and Gillian Garcia notched top three finishes in the 3-meter diving competition. Gonzalez finished in second with a score of 3:02.85 and Garcia came in third, earning a score of 267.00.

In the 200 free relay, the Aztecs broke the previous pool record but came in second. Sammy Geyer, Alma Thormalm, Lizzie Menzmer and Klara Thormalm finished in 1:33.73.

The Aztecs wrap up the Chick-Fil-A Invitational Saturday morning at 10 a.m.