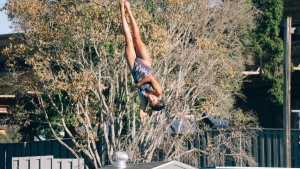 Aztecs improve to 8-0 in dual meets

The Aztecs had the fastest time in 11 swimming events, including both relays. Kristina Murphy had the top time in three events (100 breast, 200 breast, 200 IM).

On the diving side, Ximena Lechuga Gonzalez won both events with personal best scores. She had a 306.15 in the 1-meter and a 317.33 in the 3-meter. Both marks are fifth all-time in program history.

SDSU opened the meet with a win in the 200 medley relay, as Elli Ferrin, Klara Thormalm, Courtney Vincent, and Alma Thormalm combined for a time of 1:44.15, over three seconds ahead of the next closest team, Cal Poly.

Mia Ryan narrowly missed her second first place finish of the day after finishing second in the 100 free (52.99).

The Aztecs closed out the meet with a strong showing by their B team in the 400 free relay. Alma Thormalm, Klara Thormalm, Peyton Wilson and Sammy Geyer finished in 3:29.00.