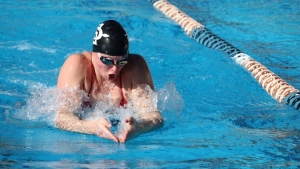 The Aztecs kicked off the meet with a dominant 200-medley relay win, as the quartet of sophomore Riley Tapley, junior Sammy Geyer, senior Klara Thormalm and junior Lizzie Menzmer touched the wall with a time of 1:45.30. The relay team’s time was almost two seconds faster than any other competitor in the event.

Sophomore Christy Neufeld started off the individual swimming events with a win in the 1000 free, finishing with a first-place time of 11:00.74. Behind her was junior Milena Karpisz, placing second with a time of 11:09.22. Junior Mia Ryan won the 200 free with a time of 1:55.49 while fellow junior Kristina Murphy earned a silver-medal finish with a time of 1:56.24.

Tapley earned her first individual win of the day in the 100 back, placing first with a season-best effort of 57.33. Geyer dominated the field of competition in the 100 breast, topping the podium with a time of 1:03.82. Sophomore Paige Mitchell continued a successful weekend in the water with a win in the 200 fly, touching the wall with a time of 2:09.13. With the dual clutched mathematically, the Aztecs exhibitioned many of their swimmers and divers in the final eight events.

Senior Elli Ferrin captured the 50 free title with a time of 24.43 with fellow senior Larisa tam finishing just .10 seconds behind her for the second-fastest mark in the event.

In the 200 breast, junior Kristina Murphy walked away with the title with a time of 2:21.69. The top finish based on time was an exhibition performance from senior Klara Thormalm, who touched the wall with a mark of 2:21.38. Similarly, Tapley earned her third event title in the 100 fly with a time of 59.02, while senior Elli Ferrin exhibitioned the event and captured the top time finish with a time of 58.11.

Murphy finished the day’s individual swims with a win in the 200 individual medley, besting the field of competition with a gold-medal finish of 2:10.09.

The Aztecs’ 200 free relay squad of Menzmer, Thormalm, Ryan, and Geyer closed out the meet with a podium-topping finish, completing the relay in just 1:36.84.

The Aztecs return to San Diego county for their next road dual meet, taking on the University of San Diego Toreros on Jan. 22 at the Sports Center Pool.