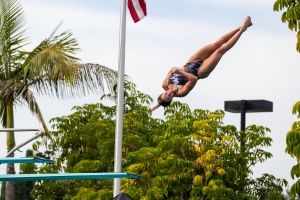 SDSU logged 13 top times out of a possible 14 events. The Aztecs began on a streak of five consecutive wins, beginning with Elli Ferrin, Klara Thormalm,  and Courtney Vincent collectively recording a first-place time of 1:46.09 in the 200 medley relay.

The Aztecs collected another trio of top-three times in the 50 free, with Klara Thormalm leading the way at 24.49. Cathy Cooper and Larisa Tam followed Thormalm with second and third place performances, logging neck-and-neck times of 24.74 and 24.77, respectively.

In exhibition action, Julia Wright posted the fastest 500 free time of the day at 5:10.12, just edging out teammate Kassidy Henson who touched the wall .14 seconds later.

Anna Stahlak, Kassidy Henson, Ava Howard and Ryan earned the top spot in the 400 free relay to conclude the meet, registering a time of 3:35.62.

The Aztec divers are currently in action at UCLA for the UCLA Diving Invitational. The Aztec swimmers next see action in Los Angeles, as they battle Loyola Marymount on Feb. 2.