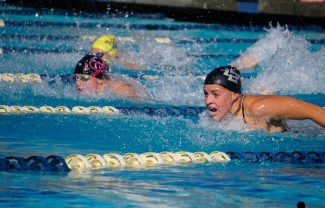 SDSU opened the meet with a win in the 200 medley relay, as Elli Ferrin, Klara Thormalm, Courtney Vincent, and Alma Thormalm combined for a time of 1:42.77.

Alma Thormalm continued SDSU’s winning ways in the 50 free, taking first place with a time of 23.38. Cathy Cooper also finished in the top three of the 50 free, timing at 23.71. Thormalm later reeled in another first-place finish, recording a 50.77 in the 100 free.

Both Klara Thormalm and Kristian Murphy broke the preexisting Canyonview Aquatic Center record in the 200 breast, finishing first and second with neck-and-neck times of 2:15.27 and 2:15.35. The previous record of 2:16.65 was owned by UC San Diego’s Jaimie Bryan and set on Jan. 21, 2017.

Despite losing her goggles midrace, Vincent earned her second individual first-place finish of the meet, winning the 100 fly by a 0.99-second margin and clocking in at 54.49.

Murphy and Meyer finished second and third in the 200 IM, recording times of 2:04.23 and 2:04.63, respectively. SDSU finished the meet with a second-place finish in the 200 free relay, as the Thormalm sisters, Cathy Cooper, and Peyton Wilson recorded a time of 1:33.85 – less than a quarter of a second behind Boise State’s top relay team.

Freshman Ximena Lechuga won the 1-meter diving event, posting a score of 285.15. Delaney Gallagher finished just behind Lechuga, finishing second with a score of 268.95. Another freshman shined for the Aztecs on the 3-meter board, as Gina Cazares her score of 265.05 placed second in the meet’s final diving event.

SDSU now has a 27-day break from competition, as the Aztecs jump back into action on Nov. 15 for a three-day event at the Mizzou Invitational.