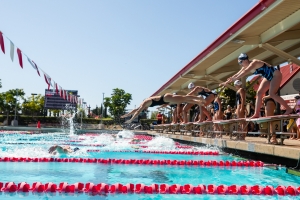 Courtney Vincent set a new career-best and posted the fifth fastest 200 breast time in Aztec history, posting a time of 1:59.59 to finish the race in a tie for second and just .32 seconds behind first-place finisher in Missouri's Azra Avdic.

Lizzie Menzmer placed ninth in the race at 2:02.57 -- the ninth fastest time in SDSU history.

The Aztecs concluded the day with a third-place finish in the 400 free relay, using a time of 3:19.98. Lizzie Menzmer, Alma Thormalm, Peyton Wilson and Vincent teamed up on the time that stands as ninth fastest in school history.

The Aztecs now look ahead to a home dual meet against Pepperdine, scheduled for Nov. 30 at 3:00 p.m. at the Aztec Aquaplex.