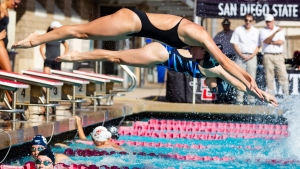 November 16, 2018 (Columbia, Mo.) - The San Diego State swimming and diving team continued a strong run at the Mizzou Invitational on Friday, maintaining their third-place standing after the second day of events. Heading into tomorrow's final day, the Aztecs (441.5 points) only trail Missouri (768.5) and Arkansas (503).

After a pair of third-place finishes in relays on Thursday, the Aztecs recorded another third-place finish in the 200 medley relay, with Elli Ferrin, Klara Thormalm, Courtney Vincent, and Alma Thormalm combining for a 1:39.39 -- the sixth fastest time in school history.

McKenna Meyer logged a second-place finish and B-cut standard time in the 400 IM, finishing at 4:15.03.

Klara Thormalm and Morganne McKennan finished second and third, respectively, in the 100 breast with neck-and-neck times of 1:00.43 and 1:00.91. Thormalm's time of 1:00.43 marks as the second-fastest in school history, while McKennan's 1:00.91 is just .04 seconds behind her career-best. Both Thormalm and McKennan qualified for B-cut times.

Ferrin also cracked into the top 10 of the SDSU record book, logging a career-best 54.03 in the 100 back to record the third-fastest time in program history.

After logging a second-place finish in 3-meter competition on Thursday, Ximena Lechuga finished third on the 1-meter board on Friday, posting a score of 277.75.

SDSU concluded the meet with a fourth-place time in the 800 free relay, with Meyer, Peyton Wilson, Mia Ryan and Kassidy Henson joining forces on a time of 7:22.74 -- tied for the 10th fastest 800 free relay time in Aztec history.