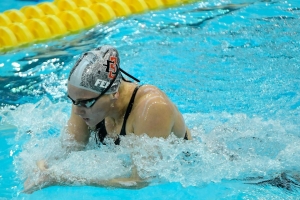 February 21, 2019 (Minneapolis) - The San Diego State swimming and diving team trimmed its deficit against first-place standing Nevada to just 2.5 points after a successful second day at the Mountain West Championships on Thursday.

The Aztecs also gained significant points in the 50 free, as Alma Thormalm, Klara Thormalm, and Sammy Geyer finished second, third, and fourth, respectively. Alma Thormalm logged a time of 22.60, good for the fourth-fastest time in school history. Klara Thormalm followed at 22.70 -- the seventh fastest in the Aztec record book -- while Geyer closely followed at 22.71, the eighth-fastest time in Aztec history.

Vincent placed second in the 200 IM finals after winning the preliminary round. Vincent's time of 1:59.91 is the fourth-quickest in Aztec history. McKenna Meyer and Kristina Murphy finished the race fifth and sixth, respectively, with neck-and-neck times of 2:01.26 and 2:01.36.

A day after winning the 1-meter MW Championship and setting a new school record, Ximena Lechuga Gonzalez placed third on the 3-meter board with a score of 338.70. The score also marks as third-best in Aztec history.

Julia Wright was SDSU's top finisher in the 500 free, placing ninth with the seventh-fastest score in school history at 4:49.84.