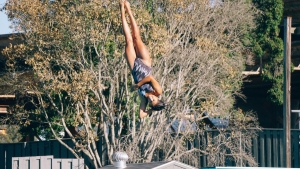 Aztecs sit in second place after day one

February 20, 2019 (Minneapolis) - Freshman diver Ximena Lechuga Gonzalez and the 200 medley relay team of Elli Ferrin, Klara Thormalm, Courtney Vincent and Alma Thormalm both set school records for the San Diego State swimming and diving team on the first day of the Mountain West Championships. The Aztecs currently sit in second with 178.5 points, trailing only Nevada by a 25.5-point margin.

The 200 medley relay team of Ferrin, Klara Thormalm, Vincent, and Alma Thormalm posted a time of 1:36.76, setting a new Mountain West record and breaking the previous school record set four years ago at the 2015 Mountain West Championships. The time also was just .01 seconds shy from automatically qualifying for the NCAA Championships in Austin, Texas next month.

SDSU concluded the event with a fourth-place finish in the 800 free relay, as Mia Ryan, McKenna Meyer, Kristina Murphy, and Julia Wright teamed up for a time of 7:16.72. The time marks as the ninth-fastest in school history.