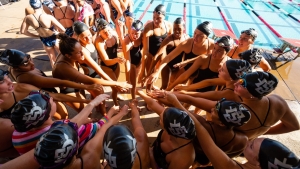 November 15, 2018 (Columbia, Mo.) - The San Diego State swimming and diving team scored 203.5 points on the first day of the Mizzou Invitational hosted by the University of Missouri on Thursday, trailing only Missouri (407.5) and Arkansas (279) while holding a significant lead on Florida International, which stands fourth with 145 points.

Courtney Vincent set a new school record in the 100 fly, posting a 52.18 to finish second and earn a B-cut standard time. Vincent broke her own record of 52.41, which she set last season at the Mountain West Championships.

Both Aztec relay teams recorded third-place finishes, with the finals round starting with Alma Thormalm, Klara Thormalm, Cathy Cooper and Peyton Wilson teaming up for a 1:30.82 in the 200 free relay. Elli Ferrin, Kristina Murphy,  Vincent and Alma Thormalm posted a 3:38.13 in the 400 medley relay, trailing second-place Arkansas by just a 0.37-second margin.

On the diving board, freshman Ximena Lechuga posted a 308.10 to place second on the 3-meter board. Lechuga's score marks as the eighth best in SDSU history.