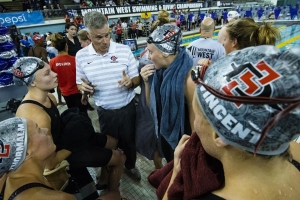 February 22, 2019 (Minneapolis) - San Diego State swimming and diving took first place in four of a possible six events on Friday, overtaking Nevada for the top spot at the Mountain West Championships heading into the final day. The Aztecs head into Saturday with a 62.5-point advantage over Nevada.

Morganne McKennan set a new Mountain West and SDSU record in the 100 breast, clocking in at 59.50 -- just .02 seconds faster than teammate Klara Thormalm, who also broke the previous conference record while reeling in second place. It marks as the third consecutive day the Aztecs have rewritten the conference record books, having previously set MW bests in both the 200 and 400 medley relays.

Courtney Vincent broke her own school record in the 100 fly, clocking in at 52.04 to take the Mountain West title in the event. McKenna Meyer claimed a first-place finish of her own in the 400 IM, touching the wall at 4:12.41 -- just .05 seconds off her personal best.

Elli Ferrin was SDSU's top finisher in the 100 back, placing fourth with a 53.67. Larisa Tam also made her way into the Aztec record book, using a 1:02.08 in the 100 breast to record the ninth fastest time in school history.

Looking to capture their first conference title since 2015 and their fourth overall, the Aztecs look towards the MW Championships final events including platform diving, the 1650 free, 200 back, 100 free, 200 breast, 200 fly, and 400 free relay.