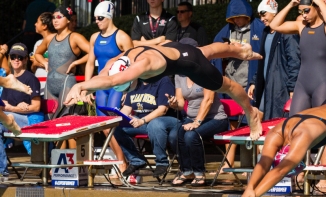 Aztecs take first place in each of the first eight events

Following the 200 free, Alma Thormalm, Morganne McKennan and Frida Berggren each collected a first-place honor in the following three events. Thormalm utilized a 58.44 in the 100 back, McKennan posted a 1:05.55 in the 100 breast, and Berggren used a 2:07.51 in the 200 fly as the Aztecs began to distance themselves from the Beavers after six events.

The Aztecs showed strength in short-distance action, with SDSU taking each of the top four spots in the 50 free and 100 free. Summer Harrison grabbed first place in the 50 free at 23.97, while Anna Stahlak posted a first-place time of 53.60 in the 100 free.

SDSU exhibitioned the final six events, leaving the dual meet with its final score of 124-100.

The Aztecs will kick off the 2018 portion of its 2017-18 slate on Jan. 8 at the Aztec Aquaplex, hosting a trio of Mountain West schools in Fresno State, Colorado State and New Mexico. The first race for the all-MW affair is scheduled for 10:00 a.m.