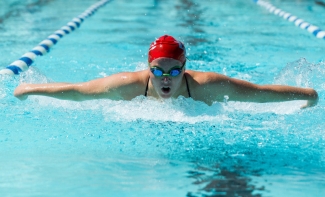 October 6, 2017 (Fresno) - The San Diego State swimming and diving team recorded a strong first day at the Chick-fil-A Invitational at Fresno State University, capturing 443 points for a second-place standing. The Aztecs only trail 2016-17 national runner-up Cal, who leads the pack with 879 points.

The field is rounded out by Nevada, Fresno State and San Jose State, which recorded 395, 332, and 305 points, respectively.

The Aztecs started the day well with Elliyana Ferrin, Caitlin Delaney, Summer Harrison, and Alma Thormalm recording a third-place time of 1:46.22 in the 200-yard medley relay.

Caitlin Delaney led the Aztecs in the 100 breast, utilizing a time of 1:04.69 to earn third place as SDSU’s top finisher.

On the diving board, the Aztecs were led by Alexandra Caplan who recorded a score of 279.40 in 1-meter competition. Caplan was also SDSU’s top finisher on the 3-meter diving board, recording a score of 253.90 for fifth place.

The Aztecs will finish up the Chick-fil-A Invitational tomorrow with a seven-event session beginning at 10:00 a.m.