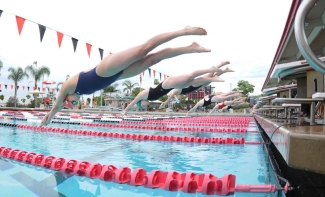 January 8, 2018 (San Diego) - The San Diego State women’s swimming and diving team defeated New Mexico (158-142) and Fresno State (179-121) while falling to Colorado State (153-147) in an all-Mountain West quad meet at the Aztec Aquaplex on Monday. With the loss to Colorado State, SDSU sees a streak of 24 consecutive dual meet victories come to an end – a streak that began at the start of the 2015-16 campaign.

Alexandra Caplan was the brightest spot for the Aztecs on Monday, claiming first place in both 1-meter and 3-meter competition. Caplan posted a 290.25 on the 1-meter board and followed that with a dominant victory in 3-meter action at 340.25 – 39.95 points higher than second-place finisher Irina Nikolaeva from Fresno State.

The meet previewed next month’s Mountain West Championships that take place in San Antonio, Texas, from Feb. 14 – 16. Prior to the MW championships, the Aztec divers conclude the 2017-18 regular season slate with the UCLA Diving Invitational beginning this Friday, while the swimmers wrap the regular season up with a home dual meet against San Diego on Jan. 19.