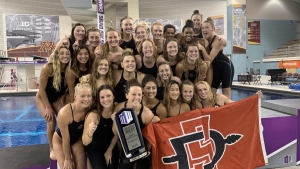 Aztecs win their first conference title since 2015 and fourth overall

San Diego State's fourth title puts the Aztecs in a tie with Boise State for the most conference title among active Mountain West members.

The Aztecs set three conference records over the four-day event, including Morganne McKennan's effort in the 100 breast (59.50) and the 200 and 400 medley relay teams consisting of Alma Thormalm, Klara Thormalm, Elli Ferrin, and Courtney Vincent.

SDSU used a balanced effort on the final day, starting with a sixth-place finish from Elli Ferrin, who logged the fourth-fastest time in school history in the 200 back at 1:57.71. One race later, Alma Thormalm claimed second place in the 100 free with a time of 49.66.

Morganne McKennan and Klara Thormalm, who both broke the previous Mountain West record in the 100 breast yesterday finished second and fourth, respectively, in the 200 breast. McKennan clocked in at 2:10.59 -- a new school record --  while Klara Thormalm touched the wall at 2:13.02.

Courtney Vincent finished third in the 200 fly, logging a time of 1:59.39 for the fourth fastest time in the Aztec record book.

SDSU's 400 free relay team of Mia Ryan, Lizzie Menzmer, McKenna Meyer, and Peyton Wilson finished the championships off with a third-place finish, clocking in at 3:20.40.

The Aztecs now await to see which student-athletes will qualify for the NCAA National Championships in Austin, Texas from March 20-23.