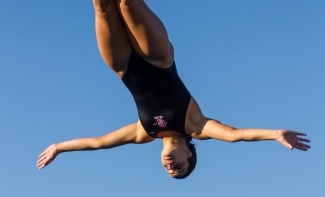 Caplan posted a ninth-place finish in the preliminary round with a score of 298.20. The senior leaped up four spots in the finals round to finish with a final score of 637.05 and secure her spot in nationals for the second consecutive season. Caplan, who earned honorable mention all-American honors last season on the 3-meter board, will join teammate Courtney Vincent, who qualified for nationals in the pool in the 100 fly.

Caplan was the lone Aztec to reach the finals. Delaney Gallagher finished 26th with a 261.85, while Nicole Dutton finished just behind Gallagher with a 261.85 to finish in 27th. Rounding out SDSU’s efforts on the 3-meter board include Emily Reed, who placed 46th with a 226.55, and Marie Yacopino, who finished in 56th with a 202.65.

SDSU wraps up the Zone E Championships tomorrow with competition on the platform board. Preliminaries from Flagstaff, Ariz. are scheduled for 11:00 a.m., while the finals round will start at 1:35 p.m.