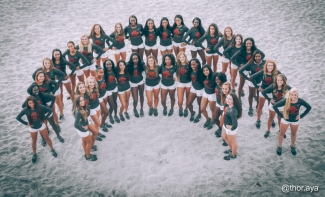 The Aztecs make their first appearance of the year with the Red-Black Intrasquad and All-Comers Meet on Sat., Dec, 9 atop Aztrack Sports Deck. More information on the meet is available here: bit.ly/2zlLnjW.

San Diego State officially opens its indoor season with the UW Preview, hosted by Washington, on Jan. 13 in Seattle.

Two weeks later on Jan. 27, the Aztecs travel to the UNM Team Invite in Albuquerque, N.M.

The Lobos will host the Mountain West Championships Feb. 22-24. NCAA Indoor Championships are set for March 9-10 at Texas A&M in College Station, Texas, for the second straight year.

The Scarlet and Black then hosts the 40th Annual Aztec Invitational, happening atop SDSU Sports Deck March 22-24. Oregon, UCLA, BYU, Air Force, Oklahoma and UNLV are among the meet participants.

On March 31, SDSU travels to Los Angeles for UCLA Legends.

The Mt. SAC Relays are next up for SDSU, taking place April 20-21 at El Camino College in Torrance, Calif. The Aztecs will also appear at Long Beach State’s Beach Invitational on April 21.

The Oxy Invitational in Los Angeles is closes out SDSU’s regular season schedule, set for May 5.

The Aztecs’ postseason kicks off with the Mountain West Championships, hosted by Fresno State, May 9-12. The NCAA West Prelims are on tap in Sacramento, Calif., for May 24-26, ahead of the NCAA Championships in Eugene, Ore., June 6-9.