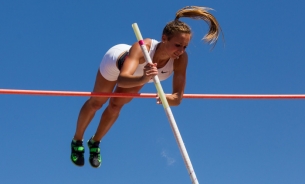 Tomorrow, San Diego State's day begins at 10:30 a.m. with junior Melody Harris in the javelin. Seniors Angel Bucci, Cali King and Elaine Ribeiro, juniors Cindy Flores and Cassidy Towner, and freshman Mary Kunigan run the 1,500 meters at 11:25 a.m. At noon, seniors Kira Moreland and Starlynn Singleton and sophomores Je’Neal Ainsworth and Lisa-Anne Barrow will compete in the long jump. Seniors Madison Gipson and Tyra Lea, and sophomore Lakin Hatcher compete in the 400 at 12:30 p.m., ahead of performances by seniors Micha Auzenne and Kassidy Ellis, and sophomore Sierra Brabham-Lawrence in the 100-meter hurdles at 1:15 p.m.

At 2 p.m., Ellis and freshman Hannah Taylor take on the high jump invitational, and junior Monique McPherson and sophomore Angela Wilson run the 800. The 100-meter dash happens at 2:55 p.m., with Singleton and junior Rochene Smith representing the Aztecs, just prior to Ainsworth's appearance in the triple jump at 3 p.m. Freshman Andrenette Knight and junior Jasmine Young are on tap for the 400-meter hurdles at 3:40 p.m., before the 200-meter dash at 4:10 p.m. for Barrow, Hatcher and Lea. The Scarlet and Black's distance runners conclude the meet for SDSU. Ribeiro is scheduled for the 3,000-meter steeplechase at 5:40 p.m., while Bucci, Kunigan and Towner will run the 5,000 meters at 6:15 p.m.

Women’s Hammer Throw (out of 37 entrants)