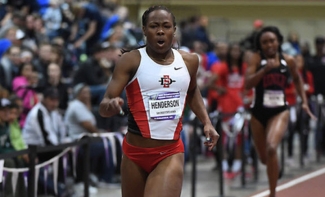 February 28, 2018 (San Diego) - Ashley Henderson and Bonnie Draxler will represent the Aztecs at the 2018 NCAA Indoor Track and Field Championships at the Gilliam Indoor Track Stadium in College Station, Texas March 9-10. This is the second year in a row the Aztecs have sent two athletes to the Indoor Nationals.

Henderson, the Mountain West Indoor Track and Field Championship Women's Outstanding Performer of the Meet, qualified for Nationals in the 60 and 200 meter dash. Her season-best time of 7.21 (altitude-adjusted) in the 60 is the seventh best in the nation. She ran an altitude-adjusted time of 22.94 in the 200 at the Mountain West Indoor Championships last weekend, the eighth best time in the country. Henderson finished fourth in both events at the 2017 Nationals, which also took place in College Station.

16 student-athletes will compete in the prelims on March 9 with eight advancing to the finals on March 10. The 60 is split into two heats, with the top two advancing plus the next four fastest times. Four heats are run in the 200 with the top eight times advancing regardless of place.

Draxler qualified for Nationals after clearing 4.31 meters in the pole vault at the Mountain West Indoor Championships, a San Diego State and Mountain West record. Her mark is tied for the ninth best in the nation.