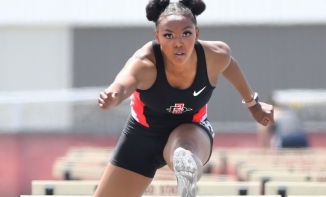 The freshman tied for first in the high jump

May 9, 2018 (Clovis) - Asia Smith finished the first day of the 2018 Mountain West Outdoor Championships in second place (out of 12) after completing four of the heptathlon’s seven events Wednesday evening at Veteran’s Memorial Stadium in Clovis, Calif.

Competing in warm and breezy conditions, Smith tied for first in the high jump, took third in the shotput, fifth in the 100 meter hurdles and seventh in the 200 meter dash.

Smith, a freshman from Escondido, Calif., cleared 5’ 7.25” in the high jump, a new personal best, to tie Nevada’s Nicole Ader for first place

Smith finished the 100 meter hurdles in 14.36 seconds, earning fifth place. Her previous best time was 14.54, although she had a tail wind of 2.3 m/s Wednesday afternoon.

In her last event, the 200 meter dash, Smith clocked in 25.82, her second time breaking 26 seconds this season.

On Thursday, Smith will wrap up the heptathlon, competing in the long jump, javelin and 800 meter run. Her first event is the long jump, which begins at 4:30 p.m. PT.

Smith’s high jump of 5’ 7.25” was not only a personal best, but also was the highest leap for an Aztec so far this season. The previous high was 5’ 5.75” by Hannah Taylor at the Jim Bush Legends Invitational March 31.

Smith is one of two freshmen competing in the 12 person field. The other, Utah State’s Talie Bonds, won the 100 meter hurdles, but sits in fourth place overall through four events.

Heptathlon Day One (4 of 7 Events)