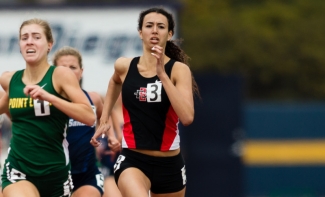 Senior Kassidy Ellis closed out the Mt. SAC Relays heptathlon on Thursday. In her first heptathlon of the year, she gathered 4,549 points for 12th place. The Bakersfield, Calif., native opened the day by taking 14th in the long jump, posting a 17-03.50 mark. In the javelin, she recorded a 75-foot, five-inch throw, placing 14th, and closed out the meet with a 12th-place time in the 800 meters at 2:32.76. Former Aztec Nicole Oudenaarden, now competing with the University of Calgary, won the heptathlon with 5,927 points.

At the opening day of the Bryan Clay Invitational, senior Elaine Ribeiro ran the 3,000-meter steeplechase in 11:17.61 for 33rd place.

The Aztecs also begin competition tomorrow at the Beach Invitational, hosted by Long Beach State. Melody Harris kicks off the meet for the Scarlet and Black with the javelin at 11:25 a.m., while Freja Liljedahl competes in the hammer throw at 1:45 p.m.