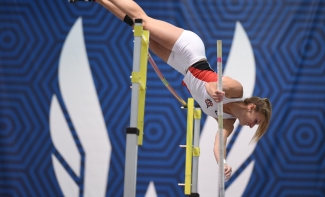 February 24, 2018 (Alberquerque) - The San Diego State track and field team closed out the 2018 Mountain West Indoor Championships with a bang Saturday at the Albuquerque Convention Center. Bonnie Draxler took first in the pole vault while setting a Mountain West and San Diego State record and Ashley Henderson took gold in both the 60 and 200 and was named the Mountain West Women's Indoor Track and Field Most Outstanding Performer for the second consecutive year. The Aztecs, who started the day in 11th place, ended up finishing in fourth place.

Draxler cleared 14-01.75 to win her third pole vault gold in four years. Her record-breaking mark comes two weeks after she tied the school record (14-01.25) at the same venue.

“I am very pleased with my performance today,” Draxler said. “Going in my main goal was to win. I wanted to remain relaxed throughout the entire competition and give every jump 100%. As for the records, it is just icing on the cake. I’m excited for the future and hope to keep jumping higher.”

Pole vault coach Rich Fox explained, “The key was having a great competitor pushing her (2017 All-American Kathern Tomzack from Air Force), and the tradition of former Aztecs setting the school, meet, and Mountain West record for her to strive for”

Henderson took first in the 60 and 200 prelims yesterday and repeated the performance Saturday. After running a time of 7.25 Friday, she finished in 7.20 Saturday, just 0.03 seconds off her school record set last year. Her performance in the 200 was even more impressive. She finished in 22.87, over a full second ahead of the second place finisher. Henderson now has taken gold in the 200 three straight years and back-to-back years in the 60.

“I wanted to cry when I saw my time in the 200,” Henderson said. “I worked so hard in the 60 meters and paid a lot more attention to the 60, so coming out and running the 200 with that time was amazing.”

Lisa-Anne Barrow continued her impressive weekend, by taking fourth in the 200 with a personal best time of 24.06.

Jalyn Harris grabbed silver in the 400 meter dash with a personal best time of 54.75, which is good for the fifth best in school history.

Other notable performances include Marissa Berry taking third in the pole vault (13-02.50) and Je’Neal Ainsworth, who took fourth in the triple jump, clearing 40-11.00, the sixth best mark in school history.