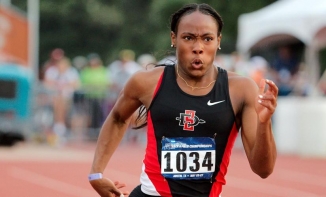 After running a time of 7.25 in the 60 on Friday, Henderson finished in 7.20 Saturday, just 0.03 seconds off her school record set last year. Her performance in the 200 was even more impressive. She finished in 22.87, over a full second ahead of the second place finisher. Henderson now has taken gold in the 200 three straight years and back-to-back years in the 60. Henderson has been a conference champion 11 times in her career, eclipsing Nicole Ireland for the most ever by an Aztec.

Bonnie Draxler took first in the pole vault while setting a Mountain West and San Diego State record. Draxler cleared 14-01.75 to win her third pole vault gold in four years. Her record-breaking mark comes two weeks after she tied the school record (14-01.25) at the same venue.

Lisa-Anne Barrow has a strong showing in the long jump, clearing 19-10.75 (6.06m), which tied her for first place, but she took second due to the tiebreaker. Her distance tied for the fourth longest jump in school history.

Jalyn Harris grabbed silver in the 400 meter dash with a personal best time of 54.75, which is good for the fifth best in school history.

All-league selections were awarded to the top-three finishers in each event at the 2018 MW Indoor Championships, which were held Feb. 22-24 at the Albuquerque Convention Center by the host New Mexico.