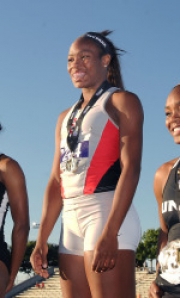 At the Mountain West championships in Fresno last month, Henderson won the 100, 200 and anchored the 4x100 and was named the Women's Outstanding Performer of the Meet.

Henderson is the second athlete to earn the Student Athlete of the Year award under SDSU track & field head coach Shelia Burrell.  She has qualified for the U.S. Olympic Trials in both the 100 and the 200.