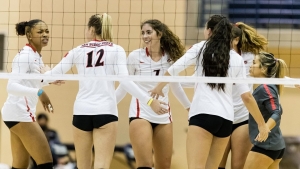 The two sides combined for 37 ties and 13 lead changes during the two-and-a-half-hour marathon, as the Aztecs defeated a Boise State squad that entered the weekend with four straight 3-0 sweeps.

Each team was plagued by 10 errant serves; however, the Aztecs posted a season-high eight aces and committed eight fewer attack errors, as the Scarlet and Black out-hit the Broncos (10-3, 10-3 MW) .236 to .157 for the match.

Offensively, SDSU was led by the trio of Nya Blair, Victoria O’Sullivan and Heipua Tautua’a, who combined for 47 of the team’s 62 kills. Blair led all players with a career-high 18 put-aways, while O’Sullivan floored 15 shots, followed by Tautua’a, who launched 14 non-returnables of her own while committing just two attack errors for a match-best .462 clip.

Tautua’a was also one of three Aztecs to post six blocks, joining O’Sullivan, who contributed a pair of solo stuffs, and Erin Gillcrist.

In addition, Lauren Lee shattered her career best with 36 digs, which is tied for the most in the Mountain West this season and ranks fifth in school history, while Ashley Vanderpan (11) and Brooklynn Hill (10) surpassed double digits in scoops. Lee’s performance marked the highest dig total for an Aztec since Aime Cordeiro collected 39 in a four-set loss to the College of Charleston on Aug. 30, 2006.

Not to be outdone, Vanderpan notched her third double-double of the year after handing out 31 assists, while Kennedy Feuerborn (5 kills) dished out 16 helpers.

In the deciding fifth set, SDSU broke a 4-4 tie with five straight points, highlighted by two Blair kills, a pair of aces from Tautua’a and another put-away by Feuerborn.

However, Boise State stormed back with a 9-4 blitz to tie the score at 13-13. Jessica Donahue and Alyssa Wissinger tallied two kills apiece during that span, while Jordi Holdaway and Allison Casillas each served up aces. In addition, the Broncos benefited from two wayward attacks and an errant serve. Following a timeout, Ohlinger gifted the Aztecs with a service error, while Gillcrist and Tautua’a combined to stymie a Kayly Pau attack at the net, as the Scarlet and Black erupted in jubilation.

Leading 2-1 in sets, SDSU tried to close out the match in a hard-fought fourth frame that witnessed 12 ties and five lead changes. Despite knocking down six fewer kills (17-11), the Aztecs managed to keep things close with three aces and four team blocks, while the Broncos shot themselves in the proverbial foot with five service errors.

SDSU led by as many as four points during the set, as Blair and Tautua’a joined forces on a block to give the visitors a 14-10 advantage. However, Boise State fought itself off the ropes, building a trio of two-point leads, including a 22-20 edge following a kill by Pau. The Aztecs knotted the score on three occasions down the stretch, including a 24-24 deadlock, but the Broncos got consecutive put-aways from Jessica Donahue and Annie Kaminski to send the match to the deciding fifth set.

Earlier, SDSU was firing on all cylinders, posting a .333 attack percentage over the first three sets, committing just two attack errors during the first stanza alone.

In that set, the Aztecs received three kills each from Blair and Andrea Walker, who also posted three block assists. Trailing 17-16, SDSU closed with a timely 9-3 run, highlighted by a pair of combined blocks from Walker and Tautua’a, while O’Sullivan and Gillcrist teamed up on another. In addition, the Scarlet and Black benefited from a wayward serve, a ball-handling error and a pair of errant attacks, including one on the final point.

Buoyed by their good fortune, the Aztecs built their largest lead of the second set at 13-8 following a kill by Tautau’a. However, the Broncos turned the tables, forging a 13-7 run, capped by two Pau non-returnables, which gave the hosts a 21-20 edge. After a timeout, SDSU tied the scored once again on a Tautua’a put-away. However, Boise State closed with a 4-2 spurt, as kills from Donahue, Pau and Ohlinger, along with a bad set, accounted for the clinching points.

Stung, the Aztecs regrouped the third frame, vaulting in front for good when a combined block by Gillcrist and Feuerborn broke a 6-6 tie. SDSU increased its lead to six points on two occasions, including a 20-14 spread after a Vanderpan ace. The Broncos responded with four straight points, pulling to within 20-18 following a Pau kill. However, Blair took over at this juncture with three kills, while Tautua’a added another to help keep the Boise State at bay.

In all, Blair had seven kills during the set, as the Aztecs maintained a 17-10 advantage in that statistic, along with a 4.0-1.0 edge in team blocks, setting the stage for further drama in the final two frames.

Ohlinger (17), Pau (15) and Donahue (11) broke the double-digit plateu in kills for the Broncos, while Casillas finished with 19 digs. In addition, Danielle Boss recorded a double-double with 46 assists and 12 digs in the loss.

San Diego State continues its spring schedule next Saturday, March 27 when it travels to the Bay Area for a single match at San José State. First serve is set for 2 p.m.