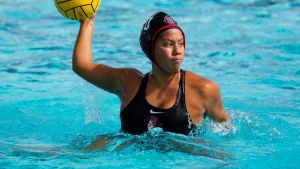 Aztecs to open season in Hawaii

SDSU will begin its season at the Rainbow Invitational and will play Sonoma State and Marist on Jan. 19, before closing the event against the host, Hawai’i, on Jan. 20.

After crossing the Pacific Ocean and returning to America’s Finest City, the Aztecs will play their alumni on Jan. 26, at Aztec Aquaplex in an exhibition contest. The annual game is set for noon.

San Diego State will make its regular-season mainland debut at the Triton Invitational at nearby UC San Diego. SDSU will play a pair of games in La Jolla on both Feb. 9 and 10. Four days later on Valentine’s Day, the Aztecs will welcome the University of Toronto to campus for a 3 p.m. exhibition.

SDSU will step back into tournament action at the three-day Barbara Kalbus Invitational (Feb. 23-24). The event, hosted by UC Irvine, will feature two games the first day and single contests on the final two days.

The Aztecs will open Golden Coast Conference action at home on March 8, against Azusa Pacific. The 4 p.m. game will precede the Aztec Invitational, which is scheduled to run on March 9 and 10. SDSU will play two games on both days of the invite.

San Diego State’s stay at home will continue for three more games beginning with a 3 p.m. date against UCI on March 15. The next day will feature another GCC contest, this time vs. Concordia at noon. The homestand concludes with a game against Princeton on March 19 at 4 p.m.

Next up is a trip to Los Angeles and Riverside counties for conference games vs. LMU and California Baptist, respectively. The game vs. the Lions is set for March 22, before taking on the Lancers the very next day.

A GCC home game vs. Santa Clara on March 28 at 4 p.m. follows the trip to the Greater L.A. area and precedes an appearance at the ASU Invitational (March 30-31) in Tempe, Ariz.

The Aztecs continue their time on the road a few days later when they face Cal State Monterey Bay on April 3, and then Fresno State two days later for a GCC clash.

The regular season ends with a pair of home games. First up is the conference finale against Pacific on April 12 at 4 p.m., with the annual Harper Cup contest vs. UC San Diego slated for April 20 at 1 p.m. The Aztecs will look to reclaim the Cup from their cross-town foes after falling in a thrilling game last season in La Jolla.

San Diego State will look to win its sixth GCC title overall and its second tournament crown when it competes at the Golden Coast Championship in Fresno. The tourney is set to run from April 26-28.