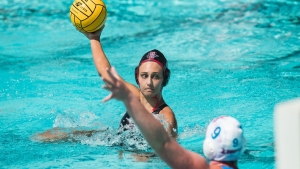 With the victory the Aztecs improved to 5-13 overall, 4-1 in the GCC, and in second place in the league standings with two games left in the regular season. Azusa Pacific falls to 3-3 on the year and 2-3 in GCC action.

The Cougars open the game with a pair of goals sandwiched around a Lucia Carballo strike. APU scored the game’s initial goal 38 seconds in, but 20 seconds later Carballo answered with a goal for SDSU, and then with 4:57 to play in the opening period Azusa Pacific jumped back in front 2-1.

And then the Aztecs took over. They scored seven times without a response from the Cougars to put a stranglehold on the game.

Karli Canale scored two of her game-high four goals to open the run. She had tallies with 4:22 and 3:02 left in the first quarter to tie the game and then give the Aztecs a lead they would never relinquish.

Emily Bennett followed Canale with a pair of goals of her own. The first came with 2:05 to go in the first and the second came at 7:01 in the second to push the SDSU advantage to 5-2. Katie Ratcliff scored the only goal for the remainder of the period and the teams went to intermission with San Diego State up 6-2.

The third period opened with a Spencer Samuel (Valhalla HS) strike, at 5:45, and then Bennett scored to make it 8-2 with 4:18 left in the quarter. APU got back into the scoring column at 3:55 to play to get the game back to an 8-3 score heading into the final stanza.

The fourth period saw the teams trade goals with Canale scoring at the 6:32 and 5:21 marks and APU answering each with a goal of its own. When the final whistle sounded the Aztecs had secured a 10-5 victory.

Raquel de Pinho recorded her second consecutive game with double digit saves, totaling 12 against the Cougars and improved her record to 5-5 overall and 4-1 in conference action.

San Diego State held Azusa Pacific scoreless from 4:57 in the first period to 3:55 in the third period, a total of 17:02 of game action or more than half to the 32-minute game.

In the Aztecs last three games, Emily Bennett has a .450 shooting percentage (9 goals on 20 shots).