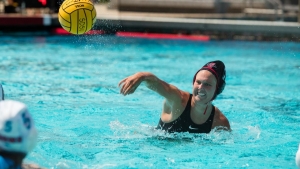 San Diego State’s record in the Harper Cup is 12-7, but the Aztecs have dropped the last five games in which the Cup was on the line. The annual event, first contested in 2002, is named for UC San Diego men's water polo coach Denny Harper. Harper played at San Diego State as an undergraduate and established the SDSU women's water polo club team. He graduated from SDSU in 1978, and coached the UCSD women's team to five collegiate national championships from 1985-1999.

Leckich got the Aztecs going 41 seconds into the game with the first goal of the contest. UCSD tied the game with 5:26 to play in the first, but Carballo put San Diego State (3-13) back in front, 2-1, with a goal at the 3:59 mark.

Over the next eight minutes, the Tritons scored five unanswered goals to lead 6-2 with 4:30 to go before halftime. With 3:16 left before the break Bennett scored, and the teams went to halftime with UCSD up 6-3.

Leckich opened the second half the way she opened the game, with a goal, 25 seconds into the third quarter, to reduce the deficit to two goals, at 6-4.

After a pair of Triton goals made it 8-4, Iturraran found the back of the cage with 1:11 to go in the third. The teams then traded goals in the final three seconds of the period, with Samuel scoring with one second left to send the game to the final quarter with the score 9-6 in favor of UC San Diego.

Bennett had the first goal of the fourth period to get the Aztecs to within a pair of tallies, but the only offense the rest of the way was a Tritons goal to make it 10-7, which was the final score.

San Diego State leads in the Harper Cup all-time series 12-7, but is winless the last five times the teams have played the event.

Karli Canale, the Aztecs leading scorer, was held without a goal for the first time this season.