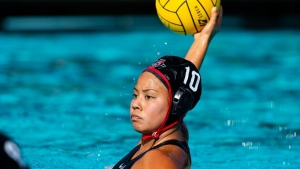 SDSU improves to 3-1 in GCC play

March 23, 2019 (Riverside) - The Aztec water polo team defeated T-No. 22 California Baptist 10-6 Saturday afternoon on the road. After giving up the first goal, SDSU would score nine of the next 11 goals on their way to their second road victory over a ranked GCC team in as many days.

SDSU improves to 10-11 overall and 3-1 in GCC play with three straight conference wins.

Entering the weekend, the Aztecs were just 2-9 against ranked teams and had fallen out of the rankings. SDSU responded with two big road GCC wins against a pair of ranked opponents (No. 12 LMU and T-No. 22 California Baptist).

The Aztecs will host Santa Clara Thursday at 4:00 p.m. and then will play three games at the ASU Invitational over the weekend.