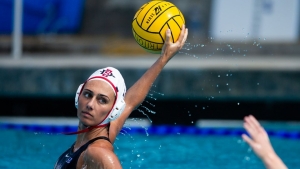 March 8, 2019 (San Diego) - The No. 22 SDSU water polo team (5-8, 0-1) kicked off the Aztec Invitational by splitting a pair of games Friday afternoon at the Aztec Aquaplex. In their first game, the GCC opener against Azusa Pacific, the Aztecs lost a tight one 10-9. The rebounded with a convincing 12-6 win over St. Francis. Emily Bennett scored five total goals to pace the Aztecs.

In the Aztecs’ first game, they fell behind 3-0 in the first 4:30 minutes, but were able to respond with a 4-0 run. Two of those goals came from Emily Bennett, who finished with a season-high four goals. The other two came from Shelby Kraft and Haley Hagerty, who gave the Aztecs a 4-3 lead with 6:48 left in the second quarter.

The GCC foes then traded scoring 3-0 runs. The Cougars scored three straight midway through the second quarter, taking a 6-4 lead. The Aztecs scored the final two goals of the first half and the first of the third quarter to take a 7-6 lead.

It was 8-8 entering the final quarter. The Cougars took the lead with a goal 1:45 into the quarter and then Karli Canale tied the game up with 4:51 left.

Azusa Pacific’s Sarah Adams scored what would be the game-winning goal just 17 seconds later. Adams and Milena Guzmán Ortiz each had hat tricks for APU.

After a quick turnaround, the Aztecs were back in the pool to face off against St. Francis. After allowing an early goal, SDSU responded with eight unanswered goals.

The Aztecs had nine players score and were led by Hannah Carrillo, Karli Canale and Delaney Binette, who each scored two goals.

After building a big lead, it allowed Coach Crawford to get show her team’s depth. Dani D’Andrea and Lindsy Peterson both scored, and backup goalkeeper Mia Harris recorded four saves.

Emily Bennett became the second Aztec to score four goals in a game. She has scored eight goals over her last three games.