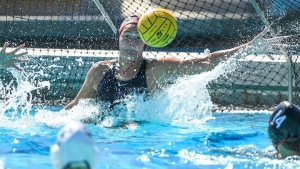 March 27, 2021 (San Diego) - Goalie Raquel de Pinho made a major college career-best 19 saves and the San Diego State water polo team outscored Fresno State 7-3 in the second half in a 13-12 victory on Saturday afternoon at the Aztec Aquaplex.

With the win, San Diego State (4-13, 3-1 Golden Coast Conference) moves into a tie with the Bulldogs for second place in the conference standings, but now owns the tiebreaker against Fresno State (7-5, 3-1 GCC).

SDSU was trailing 11-9 heading into the fourth quarter, but hung four unanswered goals on Fresno State to take a 13-11 lead.  Valhalla alum Spencer Samuel got the rally going with her third goal of the contest, 53 seconds into the period. At 5:44, Emily Bennett stole a lackluster pass out of the Fresno State zone, drove to the net and drew the defense to her.  She passed over to Lucia Carballo who beat the goalie to tie the game at 11-11.

Bennett then scored the next two goals for San Diego State. The first came 24 seconds after Carballo’s and gave SDSU its first lead since it was up 1-0. Bennett then struck again with 4:18 to play to give the Aztecs a two-goal advantage, 13-11. Fresno State scored the final goal of the game on a penalty shot with 12 seconds to play, but would not get the ball back as SDSU ran out the clock for the 13-12 victory.

de Pinho made 11 of her 19 saves in the second half and limited Fresno State to seven goals below is 19-goal a game average in its previous three GCC games.

Samuel got the Aztecs on the board first with a strike 41 seconds into the game and after a couple of Fresno State scores, Haley Hagerty tied it at 2-2 with 4:31 to go in the opening stanza. The Bulldogs responded with another two goals to push its advantage to 4-2, but back-to-back goals from Delaney Binette and Karli Canale tied it at 4-4 with just over 2:30 to go. Fresno State scored the final two goals of the period to take a 6-4 advantage into the second quarter.

In the second frame, the Aztecs and Bulldogs traded goals to open the quarter. After a Fresno State score, Canale converted a penalty shot, but Fresno State scored the final two goals of the half and carried a 9-5 advantage into the intermission.

Down four to start the third quarter, San Diego State strung three straight goals on the Bulldogs.  Carballo got the run going with a strike at the 6:16 mark. Samuel then scored just under 40 seconds later and Bennett finished the spurt with a tally with 4:53 to play to get the game back to a single goal at 9-8. Fresno State called a time out to halt the Aztecs momentum and quickly put a pair of goals on the board to increase its lead to 11-8. Carballo got one of the goals back with a goal with 2:21 left in the third and the teams went to the final stanza with San Diego State trailing 11-9.

San Diego State scored four times in the final frame and closed out the Bulldogs 13-12.

San Diego State improves to 3-1 in Golden Coast Conference play this year and in its last seven GCC games is a league best 6-1.

Lucia Carballo scored a season-high three goals in the game.