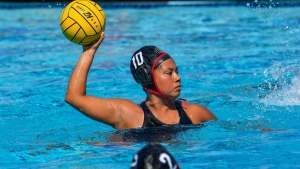 Emily Bennett and Hannah Carrillo each had three goals

April 26, 2019 (Fresno) - The No. 17 Aztec water polo team beat Santa Clara 10-7 Friday afternoon in the quarterfinals of the GCC Championships. They Aztecs advance to take on the No. 3 seed, Loyola Marymount, in the GCC semifinals Saturday at 2:30 p.m.

SDSU was extremely efficient, scoring their 10 goals on just 18 shots. The Aztecs were led by Emily Bennett and Hannah Carrillo, who each had three goals. Bennett also chipped in two assists while Carrillo had two. Shelby Kraft added two goals and had two assists. Senior goalkeeper Maura Cantoni collected 16 saves, one shy of tying her career-high.

Both teams only managed one goal in the second quarter as the defenses tightened up.

In the third quarter, the Broncos scored three of the first four goals to pull within two goals at 7-5.

The Aztecs responded and scored the next three goals to extend their lead to 10-5.

The Aztecs scored 10 goals despite attempting just 18 shots, their highest goal percentage of the season.

Earlier this season, the Aztecs beat Santa Clara 4-1, but on Friday SDSU held a 5-1 lead after the first quarter.

SDSU will take on the No. 3 seed Loyola Marymount Saturday at 2:30 p.m. in the GCC semifinals. The Aztecs beat the Lions 9-7 earlier this year. Both teams finished GCC play with a 5-2 record.