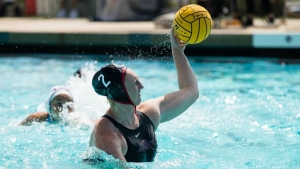 March 20, 2021 (San Diego) - Senior Emily Bennett was nearly all the offense the Aztecs needed on Saturday afternoon at the Aztec Aquaplex as she scored a season-high four times, matching the entire offensive output of Loyola Marymount, and led San Diego State water polo to an 11-4 win.

In addition to Bennett, Maddie Higginson and Delaney Binette each scored twice and Karli Canale, Laurene Padilla and Faith Cerussi added a goal apiece. Raquel de Pinho made seven saves to run her record to 3-4 on the year.

Trailing 1-0, Higginson put the Aztecs on the board with 2:40 left in the first quarter and just over a minute and a half later, Bennett gave SDSU a 2-1 lead.

Early in the second the Lions tied it at 2-2, but before the period ended the Aztecs would string together three straight goals. Cerussi put San Diego State up 3-2 with 5:48 to go before the half and Binette scored slightly less than three minutes later to make it 4-2. Bennett finished the run, and scored the eventual game winner with 36 seconds left in the quarter to send the home team to the intermission with a 5-3 lead.

It took seven minutes into the third quarter for any scoring, but in the final minute Padilla gave SDSU a 6-3 advantage only to see LMU get the goal back 25 seconds later, and the teams went to the fourth with the Aztecs up 6-4.

The last period was all Aztecs. Bennett scored with 7:18 left in regulation and then struck again 26 seconds later to make the score 8-4. Higginson, Canale and Binette finished things off with goals in the final 5:19 to give SDSU an 11-4 victory.

San Diego State improves to 5-1 all-time in its home pool against LMU.

Emily Bennett’s four goals are the most for her this season as are her nine shots.