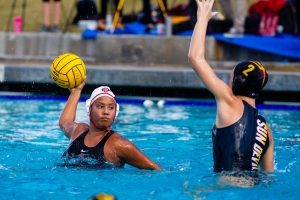 February 10, 2019 (La Jolla) - The No. 22 Aztec water polo team (3-4) closed out the Triton Invitational with two wins on Sunday. SDSU beat Pomona-Pitzer 6-5 in overtime in their first match and then beat Cal State East Bay, who was receiving votes in the latest CWPA poll, 10-3 to secure 13th place in the Triton Invitational.

The Aztecs knocked off Pomona-Pitzer on a Hannah Carrillo sudden victory goal after both teams scored a goal apiece in overtime. Carrillo led the Aztecs with three goals.

Neither team ever led by more than one goal. Carrillo got the Aztecs on the scoreboard first with the first of her three goals with 1:02 left in the first quarter. Pomona-Pitzer tied it up with 30 seconds left in the quarter and they would score the lone goal in the second quarter to take a 2-1 lead into the halftime break.

In the Aztecs’ second game of the day, they jumped out to leads of 3-0 and 4-1 in the first quarter against Cal State East Bay and never relinquished their advantage. Jessica Leckich scored a game-high three goals.

After four different Aztecs scored in the first quarter, SDSU took a 4-1 lead into the second stanza. Hannah Carrillo scored her second goal of the game with 6:38 left to push the lead to 5-1 but CSUEB responded with two straight goals to bring the halftime score to 5-3.

SDSU didn’t allow another goal and finished the game on a 5-0 run with four different Aztecs scoring.

The 10 goals the Aztecs scored against Cal State East Bay were their most since their 11-6 win against Sonoma State in the season opener at the Rainbow Invitational (Jan. 19).

SDSU held Cal State East Bay to three goals, including none in the second half, the fewest an opponent has scored on them this season.

The Aztecs host the University of Toronto for an exhibition game on Thursday at 3:00 p.m.