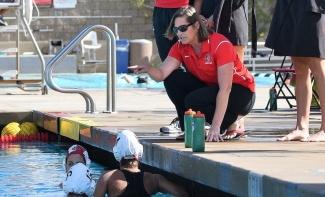 “It is an honor to receive the Sandy Nitta Award in back-to-back years for the Pacific Southwest Zone,” Crawford said. “Sandy is not only a friend, but having played for her on Team USA, I know firsthand her selfless dedication to coaching women’s water polo across all levels, which makes receiving this award even more special.”

An Olympic swimmer as a teenager, Nitta transitioned to water polo and was the head coach of the women’s national team in the 1980s and 1990s. Nitta helped the U.S. to bronze medals at the 1986 and 1991 World Championships.

Crawford is one of 10 zone winners and is now eligible to win the national Sandy Nitta Distinguished Coaching Award, which will be revealed later this year.

This year’s team will feature a roster that includes 11 freshmen, six sophomores, five juniors and just four seniors, including co-captains Courtney Jarvis and Lizzy Bilz. The group will be the 20th of Carin Crawford’s head coaching career.

Crawford in 19 seasons has compiled a record of 414-257 (.617) and has led the Aztecs to a top-17 national finish every year. Outside of the program’s five Golden Coast titles (four regular season, one tournament), Crawford has guided SDSU to the NCAA tournament in 2007 and 2008 with at-large invitations, and in 2016 with an automatic bid.