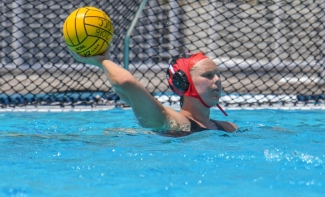 Freshman Emily Bennett single-handily put the game out of reach in the early going. The second-team all-GCC selection scored twice in the first quarter, once off a feed from Malia Magro with 5:13 on the clock and another with 2:11 to go. Then within the first 105 seconds of the second period, Bennett found Shelby Kraft for a power-play goal to put SDSU ahead, 3-0.

Not to be outdone, first-team all-league pick Hannah Carrillo got in on the act on the Aztecs’ next possession. The junior found the back of the net with 5:52 left in the half with the assist going to Paola Vizcarra, and then dished a pass to Bennett, who scored her third goal of the day. San Diego State (15-16) finished the first half with a 5-0 lead.

As impressive as SDSU’s offensive showing was, the defense played a notch higher, forcing the Cougars into posting a pair of zeros on the scoreboard through the first half of action. While the Aztecs received goals from seniors Courtney Jarvis (7:29) and Katrina King (5:56), both of which were assisted by another senior in Magro, APU still had trouble finding daylight on the offensive side of the ball.

San Diego State was 50 seconds away from a third shutout quarter, but Mireia Tutusaus Alcaraz found a seam to break up the shutout bid. Freshman Maddie Higginson added goal with 19 seconds left to put SDSU up 8-1 heading into the final eight minutes, which saw Azusa Pacific (16-16) four times to provide the Aztecs’ winning margin.

All-Golden Coast second-team goalkeeper Maura Cantoni made a game-high nine saves. The junior finished the campaign by making at least eight saves in seven of her final nine outings. Cantoni was replaced by Emily Lowell late the third quarter with the Aztecs ahead 7-1.

San Diego State, which defeated Azusa Pacific in the regular season 10-8 in overtime, improved to 7-0 all-time vs. the Cougars.