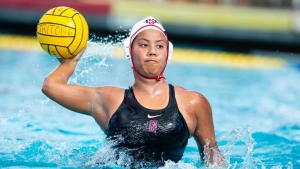 Hannah Carrillo had three goals and an assist

February 24, 2019 (Newport Beach) - The No. 25 Aztec water polo team (4-7) knocked off No. 21 CSUN 11-4 Sunday morning in their final game of the Barbara Kalbus Invitational. SDSU tied a season-high with 11 goals, which came from nine different players to avenge a 7-3 loss to the Matadors two weeks earlier.

Senior captain Hannah Carrillo paced SDSU with three goals while eight other Aztecs found the back of the net. Carrillo also recorded an assist and Emily Bennett had one goal and two assists. Goalkeeper Maura Cantoni had eight saves and held CSUN to four goals, the second lowest total allowed on the year.

The Aztecs had nine players score, a season-high.

The Aztecs are off until March 6 when they host Villanova.