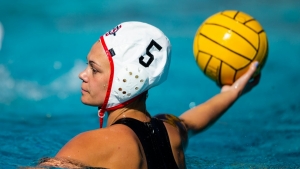 The Trojans, who are a perfect 14-0 on the year, wasted no time and scored five goals in the first 3:15 of the game. Emily Bennett got the Aztecs on the board with 3:23 remaining in the first quarter, but the Trojans would score two more goals before the end of the quarter.

SDSU got the first goal of the second quarter to pull within five but that would be as close as they would get. USC scored the next four goals.

The Aztecs were able to outscore the Trojans 3-2 in the final quarter.

This is the first game where the Aztecs haven’t had a player with multiple goals.

The Aztecs will face the loser of No. 8 Arizona State and No. 9 UC Santa Barbara Saturday morning at 8:00 a.m. at the Corona del Mar Pool in Newport Beach, Calif. They play Friday at 4:15 p.m.